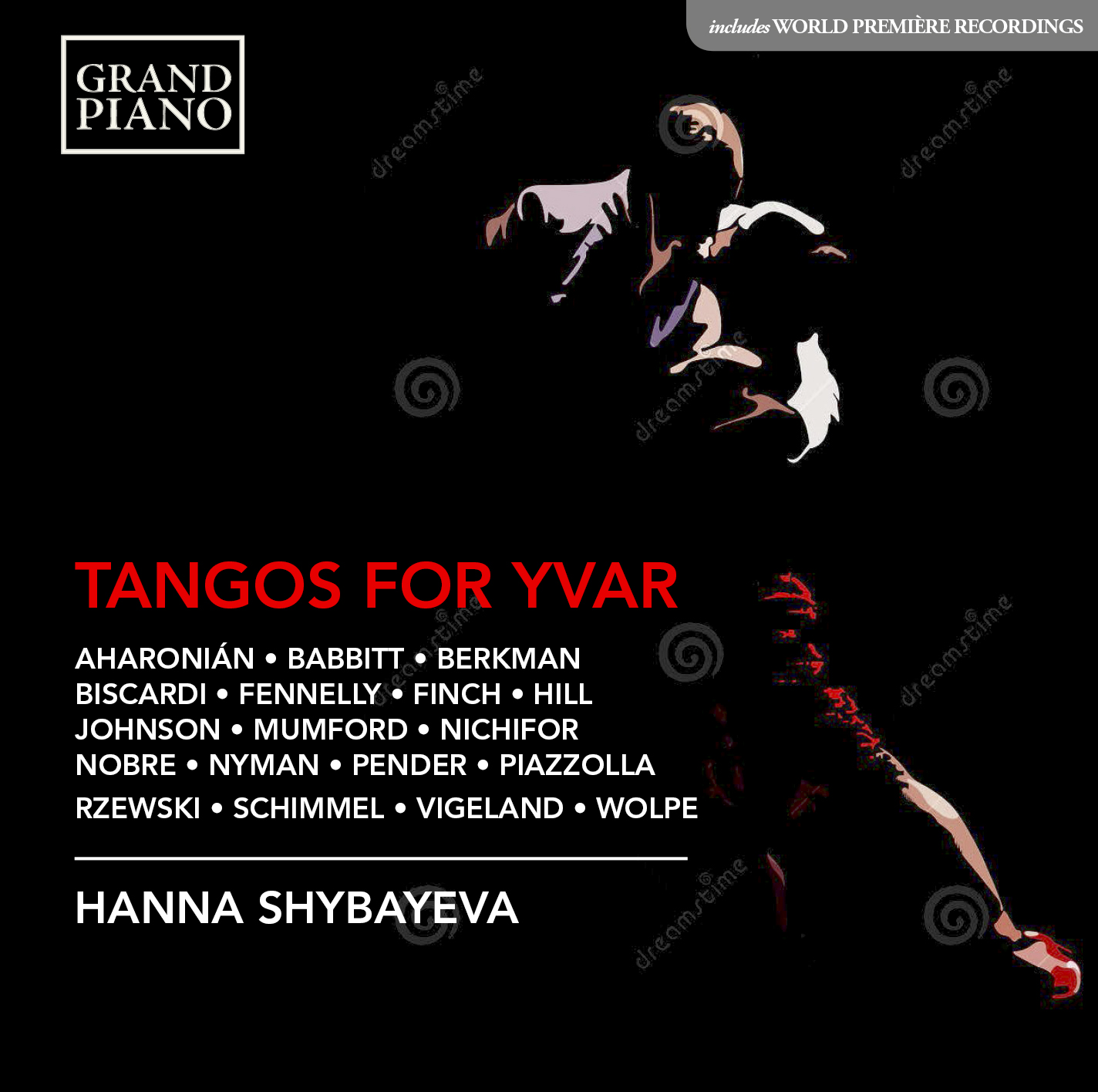 Label: GrandPianoRecords
Catalogue No.: GP794
Release Date: April 2019
Barcode EAN: 747313979424
Order
“I was always passionate about listening to tangos – it’s a very specific style of music and dance – and as a musician, you then always want to play that music yourself. I looked for tango compositions that had been originally written for the piano and in the process came across this collection. The pianist Yvar Mikhashoff had commissioned 127 composers to write tangos for him. Almost every conceivable style can be found in this collection. It was a thrilling experience to see how the composers interpreted the concept of the tango and shaped that concept into a musical work.” - Hanna Shybayeva

The American pianist Yvar Mikhashoff (1941–1993) commissioned 127 of the world’s leading composers to write tangos for him. Between 1983 and 1991 he received an eclectic, stylistically varied range of works that offer a unique body of contemporary tango music for the piano. Tango’s origin was in the waltz and mazurka but has long embraced jazz and even electronic music. In this unique collection the span is international and individual, ranging from traditional evocations to include the twelve-tone approach of Milton Babbitt, the minimalism of Tom Johnson, and the very personal voice of Michael Nyman.

Coriún Aharonián was a Uruguayan composer and musicologist. In 1984–85 he was a guest composer at the arts programme of DAAD (Deutschen Akademischen Austauschdienstes) in Berlin. He taught at the Universidad de la República and Instituto de Profesores in Montevideo and gave courses, seminars, masterclasses and workshops in Latin America, the US and Europe.

Milton Babbitt is a leading composer, teacher and writer in the field of abstract and intellectual music, and a pioneer of electronic music. At New York University he met the musical heroes of his childhood: Stravinsky, Varèse and most importantly Schoenberg. After graduation, he studied privately with Roger Sessions and worked on extending the principles of serialism beyond the realms of pitch alone. His experience and interest in other musical genres such as jazz has meant that he has had a pivotal role in bridging the gap between serialism and other styles of composition prevalent in the late-twentieth and early twenty first centuries.

Robert Berkman has spent 35 years as the music director of America’s last surviving piano roll factory. He is among a handful of performing ‘pianolists’ in the world, capable of exploiting the player piano’s expressive capabilities to a remarkable degree, and is increasingly in demand as a speaker and recitalist in genres ranging from classical to jazz to rock ‘n’ roll to the avant-garde.

Chester Biscardi’s music has been performed throughout Asia, Europe, and North and South America. It has been featured at the Beijing Modern Music Festival, the Gaudeamus Festival in Rotterdam, the Huddersfield Contemporary Music Festival in England, Moscow Autumn, Music Today-Japan in Tokyo, the Thailand Composition Festival in Bangkok, the Lincoln Center Out-of-Doors Festival, the North American New Music Festival in Buffalo, the Festival of New American Music in Sacramento, Piccolo Spoleto, the Staunton Music Festival, the International Guitar Festival of Morelia, and the Bienal of São Paulo, Brazil. Performances of his music have also been sponsored by the American Composers Orchestra, the BBC, London, the Chamber Music Society of Lincoln Center, the Cygnus Ensemble, Ensemble TIMF of Korea, the Gothia Percussion Ensemble of Sweden, the Group for Contemporary Music, the Houston Symphony, the National Flute Association, the New Jersey Percussion Ensemble, the Orchestra Sinfonica di Roma della RAI, the Orchestra of St Luke’s Chamber Ensemble, Sequitur, and UNESCO/International Music Council.

Brian Fennelly studied at Yale. From 1968 to 1997 he was Professor of Music in the Faculty of Arts and Science at New York University and Professor Emeritus until his death in 2015. In 1997 he received a lifetime achievement award from the American Academy of Arts and Letters. His music has been awarded several prizes.

Douglas Finch is a Canadian pianist and composer and has written many works for piano, chamber ensembles and orchestra, as well as music for five feature films, including A Change in the Weather released in summer 2017. Finch teaches piano, composition and improvisation at Trinity Laban Conservatoire of Music and Dance in London.

Jackson Hill is an American composer. He studied Buddhist chant as a Fulbright Fellow in Japan in the 1970s. He has received numerous awards and prizes for his music. He taught at Duke University and at Bucknell University, where he served as Associate Dean, Presidential Professor, and Chair of the Department of Music.
Tom Johnson is an American minimalist composer and a former student of Morton Feldman. From 1971 to 1983 he was a music critic for The Village Voice, an anthology of these articles was published in 1989 under the title The Voice of New Music. During this New York period he also composed four of his best-known works: An Hour for Piano (1971), The Four- Note Opera (1972), Failing (1975) and Nine Bells (1979).

Jeffrey Mumford has received numerous fellowships, grants, awards and commissions. His music has been performed extensively by major orchestras, soloists and ensembles, both in the United States and abroad. He is currently Distinguished Professor at Lorain County Community College in Northern Ohio.
The Romanian composer Şerban Nichifor is well-known for his many compositions dedicated to the victims of the Holocaust, and was awarded the Order of the Crown in 2008 by the Belgian government. His musical style is based on neo-romanticism with an influence of jazz.

Marlos Nobre is a Brazilian composer. He pursued advanced studies at the Latin American Center in Buenos Aires and worked also with Alexander Goehr and Gunther Schuller. He is currently the President of the National Music Committee of IMC/UNESCO, the Director of Contemporary Music Programmes at Radio MEC-FM of Brazil, and President of ‘Jeunesses Musicales’ of Brazil.

Michael Nyman was born in in Stratford, East London on 23rd March, 1944. He was educated at the Sir George Monoux Grammar School, Walthamstow. He studied at the Royal Academy of Music from 1961–64—academic studies with Dr Peter Fletcher, composition with Alan Bush and harpsichord with Geraint Jones. Between 1964–67 Nyman was a Ph.D student in Thurston Dart’s newly-founded music department at King’s College, London. [Visit composer page for complete bio]

Scott Pender holds degrees in philosophy from Georgetown University and music composition from Peabody Conservatory. Pender has written a wide variety of music including theme music for the C-SPAN series First Ladies: Influence & Image, and several albums of his works are available.

Astor Piazzolla was born in Argentina in 1921 and became one of the major classical composers of that country. He became so besotted by the music of the South American dance, The Tango, that he destroyed his early works and devoted his life to writing music with that rhythm as its basis. He has developed this art to the point where it is difficult to detect the dance in his complex and strictly classical music. Outside of the South American continent his music was little known until the past decade, when a renewed interest in the dance, mainly through major exposure in the cinema, has taken his works back into the concert hall. Though there are examples of the dance used in its most basic and popular form, Piazzolla has composed most of his music for small chamber groups or solo instruments. Most is written in a very contemporary 20th century style, usually calling for virtuosity of performance.

Born in Westfield, Massachusetts in 1938, Frederic Rzewski studied music at first with Charles Mackey of Springfield, and subsequently with Walter Piston, Roger Sessions, and Milton Babbitt at Harvard and Princeton Universities. He went to Italy in 1960, where he studied with Luigi Dallapiccola and met Severino Gazzelloni, with whom he performed in a number of concerts, thus beginning a career as a performer of new piano music. Rzewski’s early friendship with Christian Wolff and David Behrman, and (through Wolff) his acquaintance with John Cage and David Tudor strongly influenced his development in both composition and performance. In Rome in the mid-sixties, together with Alvin Curran and Richard Teitelbaum, he formed the MEV (Musica Elettronica Viva) group, which quickly became known for its pioneering work in live electronics and improvisation. In 1977 Rzewski became Professor of Composition at the Conservatoire Royal de Musique in Liège, Belgium.

William Schimmel is a virtuoso accordionist, author, philosopher and composer. He is one of the principle architects in the tango revival in America, the resurgence of the accordion, and the philosophy of Musical Reality (composition with pre-existing music). Regarded as the world’s greatest accordionist by National Public Radio, he has performed with virtually every major symphony orchestra in America.

Nils Vigeland was born in Buffalo, NY, in 1950. He made his professional début as a pianist in 1969 with the Buffalo Philharmonic Orchestra, Lukas Foss conducting. He later studied composition with Foss at Harvard University and Morton Feldman at the University at Buffalo. Since 1978, he has lived and worked in New York City, directing the Bowery Ensemble (1980–88), which was closely associated with the music of Feldman and John Cage. He taught at Manhattan School of Music from 1982 to 2013. His music has been performed by the English National Opera, the Milwaukee Symphony and the Brooklyn Philharmonic, among others. With Eberhard Blum and Jan Williams, he recorded the complete extended length works for flute, percussion and piano by Morton Feldman on HAT ART. His own music is available on EMF, Focus, Lovely Music, Mode, and Ravello releases.

Born in Berlin, Stefan Wolpe studied there at the Klindworth-Scharwenka Conservatory, later leaving home to take refuge in an artists’ commune. He attended Busoni’s master-classes and was involved in the artistic Dadaism movement, also working as an accompanist for silent films and as a bar pianist. At the advent of National Socialism he moved briefly to Vienna, where he had lessons with Berg, and then, by way of Romania, to Palestine. In 1938 he moved to New York, seeking less conservative musical surroundings. In the United States he became an influential teacher at various establishments, continuing his association with leading innovative artists and musicians, his colleagues including John Cage and Lou Harrison. His pupils included Morton Feldman and Charles Wuorinen.